A lifelong resident of the Hudson Valley, Frank Marquette is the owner-operator of Murder Café and Theatre on the Road. He has been writing and producing original murder mystery plays for Mohonk’s mystery weekend since 2017 and has been presenting “living history” tours and performances at local historic sites since 2013. Beginning in 1998 he has written and produced 12 original plays and has acted in and directed dozens more; Frank has also appeared in national commercials, and a number of television shows. He also conducts workshops at the annual NYSTEA (New York State Theatre Education Assoc.) Conference.

Each live lecture is approximately 50 minutes long. For details, availability and fees call 845-475-7973 or email theatreontheroad@gmail.com. 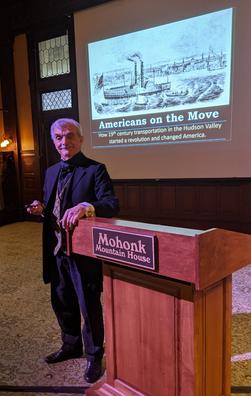 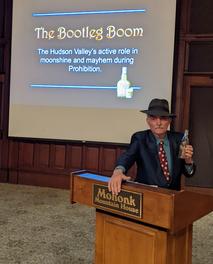 The Hudson River School was a mid-19th century American art movement personified by a circle of landscape painters whose artistic vision was influenced by Romanticism. Their paintings typically depict the natural beauty of the Hudson River Valley and the surrounding areas: mountains, waterfalls and sunsets. The Hudson River school was the first native school of painting in the United States; it not only celebrated the natural beauty of the American landscape, it gave artists the opportunity to become independent of European schools of painting. This lecture will present the work of Thomas Cole, the resident of nearby Olana, who is credited with founding this influential school of art, and Frederic Church, a master of this art form. 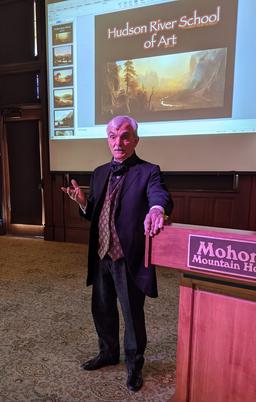 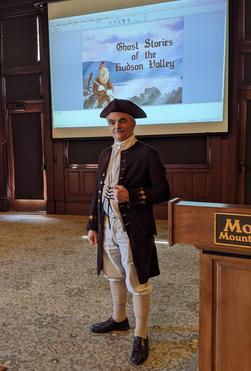 AMERICANS ON THE MOVE

In the 19th century the Hudson Valley was a hotbed of transportation; there was a rapid rise in manufacturing and the movement of goods thanks to the railroads and waterways around us. In this compelling lecture Frank Marquette will focus on the role played by the Delaware and Hudson Canal, the Hudson River, the Valley’s roadways and the railroad industry; he’ll give examples in words and pictures of how they were responsible for moving natural resources and manufactured goods of every description from their sources, through the Hudson Valley and to New York City and beyond. All of this activity stimulated the growth of our economy and played a major role in the industrialization of the United States.

The Hudson Valley region of New York State played an active role in the bootleg route between New York City and Canada. Between 1920 and 1933 the cities, townships and remote villages in the areas surrounding the Shawangunk Mountains were safe havens for gangland distilleries, notorious bootleggers, speakeasies, murder and mayhem. In his spirited lecture Frank Marquette takes you to Dutch Schultz’s bunker and distillery in nearby Pine Plains, the Barmann Brewery in Kingston and Friedman’s Hotel in Highland, both of which were the base of operations of notorious gangster Legs Diamond. The role of women in the lucrative business of bootlegging will also be explored. Yes, there were dozens of “whiskey women” operating stills in the area; surprisingly they were ignored by the Feds who were only interested in bringing down the headline grabbing “big boys”.

Four lectures, under the category Hudson Valley Highlights, are now available for your location.

GHOST STORIES OF THE HUDSON VALLEY

The areas surrounding us are riddled with historical figures and events that not only shaped history but also influenced the nation. It is also home to many urban legends and famous ghosts starting with the Half Moon, the ship manned by explorer Henry Hudson in 1609. From New York City to nearby Highland, sightings of Hudson’s ghost ship have been reported for centuries. In his spirited lecture, Frank Marquette will also recount the story of Lincoln’s funeral train, which made its way north on the east side of the Hudson River in late April 1865. Over the past 156 years hundreds of people have claimed to have encountered the train along with its whistle and  smoke. Frank will also retell the stories of several other prominent spirits and who have been spotted in local churches, hotels, jails, hospitals and maybe, just maybe, the building you are sitting in now.